I saw this on the BBC News App and thought you should see it: The Kremlin calls on the US Treasury to come up with proof after it told the BBC it considered President Vladimir Putin to be corrupt.
Disclaimer: The BBC is not responsible for the content of this email, and anything written in this email does not necessarily reflect the BBC’s views or opinions. Please note that neither the email address nor name of the sender have been verified.
Tagged america, bbc news, coruptie rusia, putin corupt, vladimir putin
News Former Israeli PM Ehud Olmert is ordered to serve 18 months in jail for bribery, as a longer sentence is reduced by the Supreme Court.
Disclaimer: The BBC is not responsible for the content of this email, and anything written in this email does not necessarily reflect the BBC’s views or opinions. Please note that neither the email address nor name of the sender have been verified.
Tagged bbc news, BBC News App, hazard moral, iphone bbc app, Olmert
Events, News 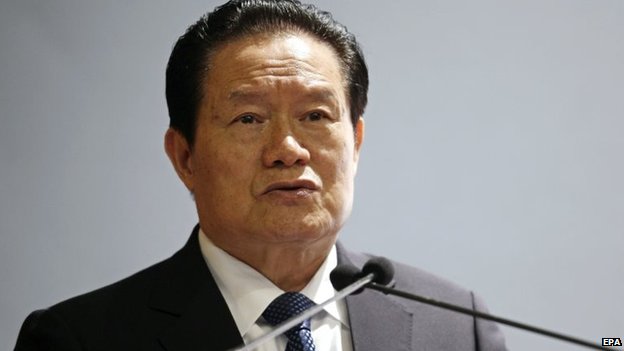 Ex-security chief Zhou Yongkang, the most senior Chinese official to be investigated for corruption, has been arrested and expelled from the Communist Party, state media report.

The Supreme People’s Procuratorate, China’s top prosecuting body, said it had opened a formal probe against him.

Before he retired two years ago, Mr Zhou was the head of China’s vast internal security apparatus.

Many of his former associates and relatives also face corruption probes.

Since coming to power, Chinese President Xi Jinping has launched a high-profile campaign to weed out corruption among party and government officials.

Mr Zhou’s arrest was announced in a statement by the Supreme People’s Procuratorate, released late on Friday night.

Mr Zhou, who is in his 70s, has not been seen in public for more than a year.

Analysts say the investigation against Mr Zhou allows Xi Jinping to consolidate his power base, remove people opposed to his reforms, and improve the image of the Communist Party.

Zhou Yongkang was allegedly the most feared and powerful senior official before he retired two years ago from the pinnacle of China’s decision-making body. He is also the biggest “tiger” – the highest ranking official – caged by Xi Jinping in his anti-corruption drive.

Dubbed “Master Kang”, Mr Zhou put many of his followers in powerful positions in the oil and security sectors during his heyday in office. Many of his loyalists have since been either sentenced or indicted on corruption charges.

It has taken over a year to investigate his case, which suggests the authorities are mindful of its sensitivity. Some suspect the party would rather deal with his case in secrecy, given how much Mr Zhou knows.

The fact that he is to be investigated by state prosecutors means the authorities have gathered sufficient evidence.

It also shows an ever-more confident Xi Jinping making Mr Zhou a case in point to further consolidate his power.

The suspense now is over whether Mr Zhou will be charged and tried in public, in the fashion of his disgraced former ally Bo Xilai.

A Chinese minister has previously said that the investigation against Mr Zhou would take a long time to complete.

Bo’s wife Gu Kailai was given a suspended death sentence in 2012 for the murder of British businessman Neil Heywood.

Bo’s downfall was seen as the biggest political shake-up to hit China’s ruling elite in decades, and revealed divisions at the top of the party over how the scandal should be handled.