Tesco and Marks & Spencer today both announced a sharp slump in sales over the Christmas period.

Britain’s biggest supermarket said sales over the past 19 weeks were down 2.9 per cent and the UK’s largest high street chain said its general merchandise sales fell 5.8 per cent in the past 13 weeks.

Tesco today slashed its prices and announced it would shut 43 unprofitable stores but has refused to reveal the ones being closed and how many jobs will go.

CEO Dave Lewis also announced its head office in Cheshunt would be shut down and they will sell-off large chunks of its business to save cash after the worst year in its history.

M&S said it struggled in the run-up to Christmas because its new online distribution centre failed to cope with demand, resulting in no next day deliveries and longer waits for customers.

Scroll down for video 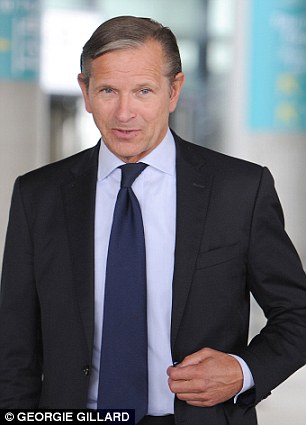 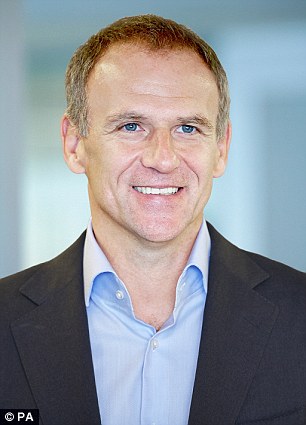 In the firing line: M&S boss Marc Bolland and Tesco CEO Dave Lewis are under huge pressure after another drop in sales over Christmas 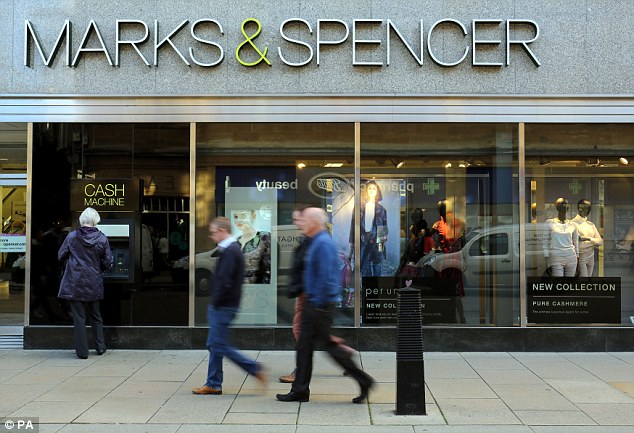 Tesco and Marks & Spencer both appear to need to change strategy to turn their businesses around.

The supermarket giant revealed sales fell 2.9 per cent in the 19 weeks to January 3 but over the six-week Christmas period they were only down 0.3 per cent, which was better than expected.

Marks & Spencer said sales over the festive period were far worse than expected with like-for-like sales in its general merchandise division – which is mainly women’s clothes – down 5.8 per cent in the 13 weeks to December 27.

There is now huge pressure on Chief executive Marc Bolland, who blamed an ‘unsatisfactory performance’ in M&S’s e-commerce distribution centre.

M&S moved to a new online only platform last year and has been struggling with a raft of teething issues.

Trading in October and November was also affected by unseasonal weather conditions which M&S said impacted sales across the clothing sector and resulted in a highly promotional market.

The performance was a fourteenth consecutive quarterly decline in general merchandise sales for the British retailer, far under-performing analyst expectations for a three per cent drop.

A 0.1 per cent rise in food sales – usually M&S’ strongest department – in the same period was also lower than the 0.9 percent the market had expected.

M&S shares opened three per cent lower after the worse-than-expected performance dashed hopes in November of an improved trend in clothing sales.

‘New collections, including those in place over the Christmas period, had some strong pieces and, generally, looked good – especially in larger stores.

‘However, it is fair to say that the rejuvenation of M&S’s clothing offer is at a relatively early stage and it has not yet completely won back the confidence of consumers. This means that performance can easily be blown off course by negative headwinds, and the gusts certainly blew this Christmas.’ 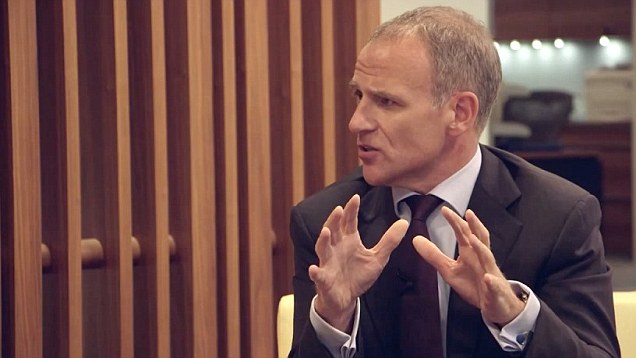 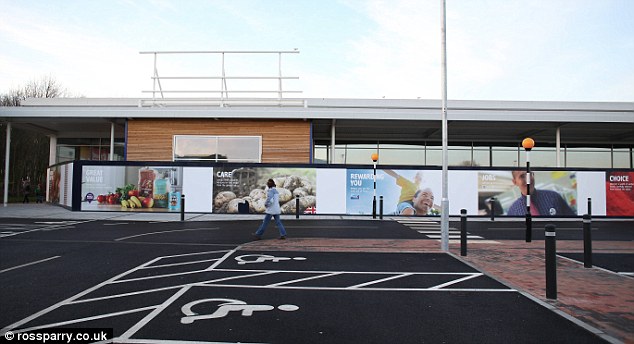 A Tesco store in Immingham, North Lincolnshire that will now not open following the company Christmas sales figures 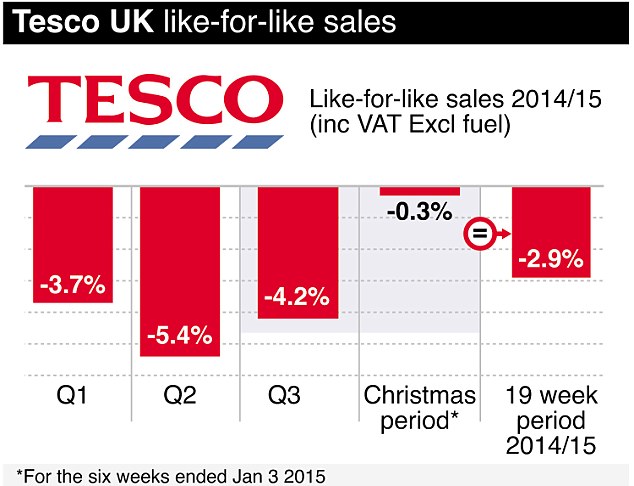 Figures: Tesco revealed another fall in like-for-like sales but the figures were slightly better than previous quarters 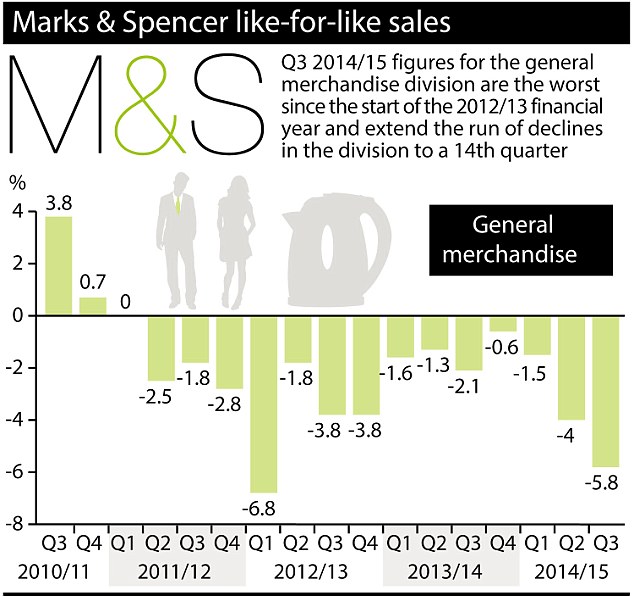 Disappointing: The latest drop in sales was a fourteenth consecutive quarterly decline in general merchandise sales for the British retailer

Tesco used the day it announced its results to set out how they would change the business and win back customers. 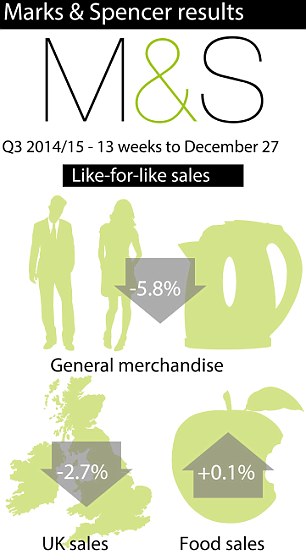 New figures: Marks and Spencer’s latest results showed how sales in key areas apart from food were all down

Dave Lewis said the supermarket was to close its final salary pension scheme and shut its main headquarters in Cheshunt, Hertfordshire, in 2016, moving to Welwyn Garden City. A restructuring of central overheads is expected to save £250 million a year.

In addition to the shutting of 43 shops, the group announced a ‘significant revision’ to its building programme by shelving 49 proposed stores.

It is also selling Tesco Broadband and UK download business Blinkbox to TalkTalk and exploring options for the disposal of its dunhumby data business, as well as cancelling a final-year dividend for 2014/15.

The raft of announcements came as the supermarket also fired the latest salvo in a New Year price war, by cutting the cost of some of its best-known products.

Chief executive Dave Lewis said: ‘We have some very difficult changes to make. I am very conscious that the consequences of these changes are significant for all stakeholders in our business but we are facing the reality of the situation.

‘We have some very difficult challenges to make. Our recent performance gives us confidence we can deliver’.

Tesco also cut the cost of some of its best-known products a day after Asda and Sainsbury’s did the same.

The under-pressure grocer said the move meant average savings of 25 per cent on 380 items under brands including Hovis, Coca-Cola, Marmite and Tetley.

The price cuts are the latest in the industry after Asda yesterday cut the prices of 2,500 ‘essentials’ such as fruit and vegetables, cereal, nappies, toilet rolls, milk, meat, eggs and fish. Rival Sainsbury’s also announced further reductions as part of a £150 million price-cutting plan disclosed in November. 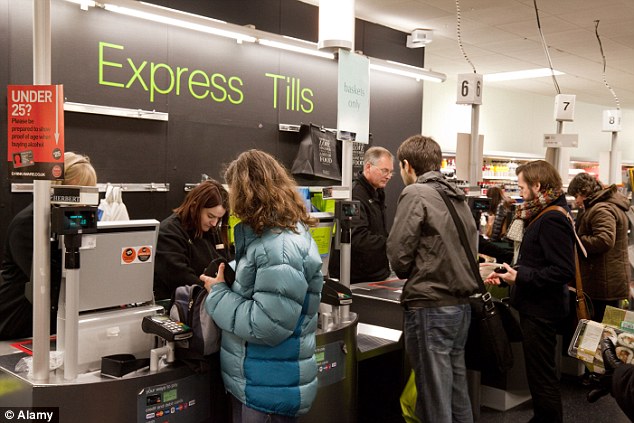 Growth: Sales in M&S lucrative food business were up over Christmas but were still worse than expected 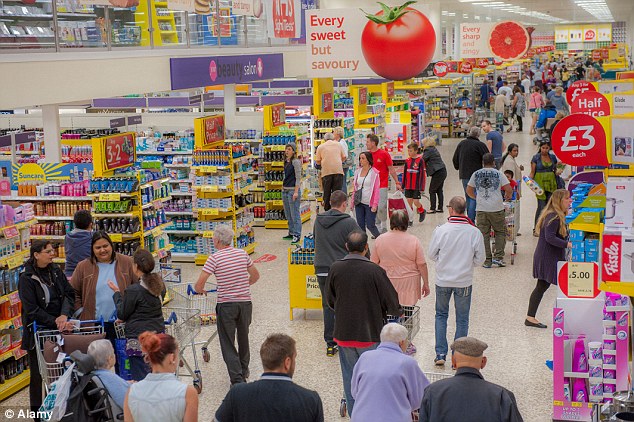 New plan: Tesco has announced how it plans to turn round the business by cutting prices and its own costs

Its market share and share price have taken a hammering as sales have fallen and millions of customers have flocked to Aldi and Lidl or high-end rivals Waitrose and Marks & Spencer.

The battle between supermarkets has also sparked price war, saving shoppers £182million in deals in the past three months and at least £450million in deals promised this year.

Tesco’s chief customer officer Jill Easterbrook said the cuts formed part of a strategy to improve the company’s focus on service and availability.

She added: ‘We know that customers want to see changes in the way we serve them. One of the biggest things they’ve been saying is that they want prices which are simple, consistent and low.

‘The changes we’re making today are a first step in that direction – and we’ve focused on many of the favourite brands customers choose every day.’

2014 was the worst year in Tesco’s history with shares now worth up to half what they were 12 months ago.

Tesco is attempting to lead a fightback after a dire 2014 saw it issue a number of profit warnings, culminating in December’s forecast that annual trading profits will slide to £1.4 billion from a predicted £2billion. 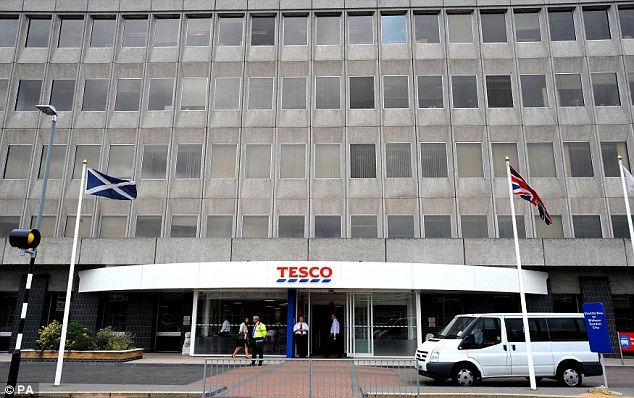 All change: Tesco’s headquarters in Cheshunt, Hertfordshire, pictured, will be closed down as will 43 unprofitable stores

TESCO’S PLANS TO TURN ROUND BUSINESS AFTER NIGHTMARE 2014

It has put out a unprecedented four profits warnings in a year and is being investigated by the Serious Fraud Office over whether there was a criminal conspiracy to ‘cook the books’.

The Serious Fraud Office continues to investigate whether there was a criminal conspiracy to improve Tesco’s results over several years.

Last month  it was announced that Tesco now faces a wider-reaching probe into its finances amid suspicions a black hole in its accounts is far bigger than originally stated.

The Financial Reporting Council, the professional body for accountants, wants to formally investigate accounts filed in 2012, 2013 and 2014.

The supermarket originally suggested profits were overstated for the first six months of this year by £250million. However, it has now emerged the true figure was a higher £263million and the problems date back to 2012.

Tesco bosses could face prison if the Serious Fraud Office’s criminal inquiry finds any conspired to cook the books and it suspended eight senior executives in connection with the accounting irregularities.

Sales are also falling at their steepest level in four decades and they have issued four profit warnings in the past year.

Dave Lewis was parachuted in from Unilever in September to take over from Philip Clarke, who worked his way up from the shop floor to CEO, but lost his job over plunging sales and profits.

But Mr Lewis is already under pressure because he is yet to reveal a full plan showing how he will turn the supermarket around.

He has though cut costs and ended many perks for executives, getting rid of Tesco’s fleet of private jets and even stopping his own limousine and he now commutes by train.

TIMELINE: HOW THE PROFITS CRISIS THAT ROCKED TESCO HAS UNFOLDED 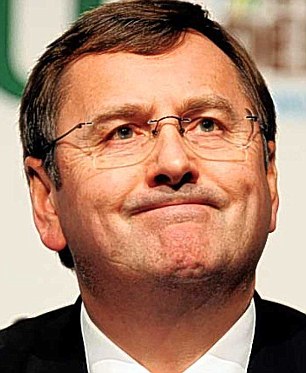 January 12, 2012: Less than a year into Mr Clarke’s tenure, Tesco shocks the market with its first profit warning in almost 20 years. Shares plunge by as much as 15 per cent, or more than £4 billion.

April 17, 2013: Tesco reports its first fall in annual profits in 19 years, tumbling almost 96 per cent to £120 million from a year earlier. The firm is hit by a £1.2 billion charge as it confirms it will leave the U.S. and also suffers a £804million write-down in the UK on land bought at the height of the property boom.

February 25, 2014: The supermarket promises to spend an additional £200 million on lower prices for basic products, such as carrots, tomatoes, onions, peppers and cucumbers.

April 16, 2014: Mr Clarke brushes off speculation about his future despite little sign that his £1 billion plan to turn around Tesco is bearing fruit. Profits fall 6.9 per cent to £3.05 billion for the year to February 22.

June 3, 2014: Till-roll figures from Kantar Worldpanel show a decline in Tesco’s market share to 29 per cent in the 12 weeks to May 25, compared with 30.5 per cent a year earlier. A day later, the chain reports a 3.7 per cent fall in like-for-like sales for the first quarter of its financial year.

July 21, 2014: Tesco announces that Mr Clarke will step down from the board on October 1 to be replaced by Unilever executive Dave Lewis. Sales and trading profit in the first half of the year are ‘somewhat below’ expectations, the company adds.

August 29, 2014: Tesco issues profit warning to tell the markets that it expects its first-half profits will be £400million less than expected. It slashes dividend payments by 75 per cent and £1billion is wiped off the company’s market value.

September 22, 2014: Company launches an investigation after admitting that its previously warned of fall in takings actually over-estimated profits by as much as £250million. Four executives are suspended and shares dive to their lowest level in 11 years as the revelation triggers its third profits warning in as many months.

September 23, 2014: Firm plunges into further crisis as it emerges the chain’s sales have fallen at their fastest rate in more than 20 years. Figures show total spending by shoppers over the past 12 weeks down 4.5 per cent year on year – the worst trading fall seen by the retailer in more than two decades.

October 1, 2014: Britain’s financial watchdog, the Financial Conduct Authority, starts a full investigation into the company in the wake of the accounting scandal

October 2, 2014: Billionaire investor Warren Buffett concedes that his investment in Tesco was a ‘huge mistake’

October 23, 2014: Supermarket reveals profits scandal is worse than expected – £250million instead of £263milllion – as well as a drastic slump in profits. Chairman Sir Richard Broadbent quits that morning because ‘the issues that have come to light are a matter of profound regret.’

December 9, 2014: Company had £2billion wiped from its market value in minutes today after it announced its annual profits may be £550million lower than expected.

December 17, 2014: Analysts at JP Morgan Cazenove publish research showing what could be a £174million gap in the grocer’s profit, on top of the £263million figure Tesco identified from independent analysis by Deloitte.